How to see Copenhagen on a budget

Back in August I visited Copenhagen to celebrate a friend’s birthday. She’s a massive fan of the TV series The Bridge, so desperately wanted to visit the Danish city as well as cross the Oresund Bridge to Malmo, Sweden. In the weeks leading up to my visit, when I mentioned to people that I was heading to Copenhagen, the response I most often got was “wow, that place is expensive!” The whole of Scandinavia has a reputation for being a bit on the pricey side, and even coming from reasonably spendy London I found most things eye wateringly expensive in Copenhagen (probably exacerbated by the rubbish exchange rate on the pound) However, that really shouldn’t put anyone off visiting the Danish capital, as it’s a fantastic city, and as I found out it is totally possible to see Copenhagen on a budget.

I’ve included the cost break down and current exchange rate for all the attractions, transport and accommodation, but will include food and drink in a separate post. Copenhagen has a flourishing foodie scene and I didn’t want to cram it all into one post!

So without further ado, here’s how I saw Copenhagen on a budget…. 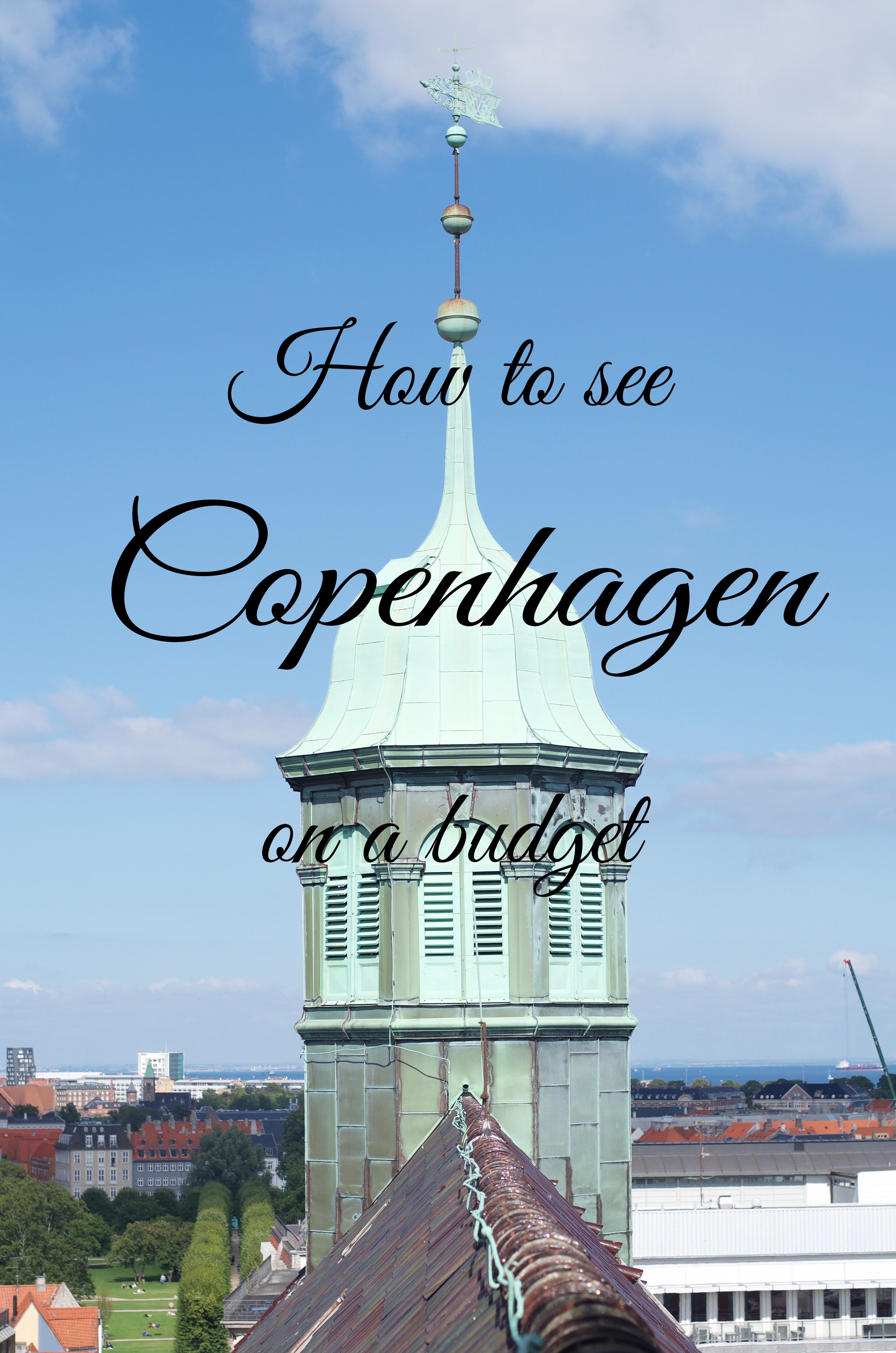 There were 5 of us on the trip, so it made complete sense to stay in an apartment. Staying in an apartment is much more cost effective for a group, plus it meant we could cook our own food saving us even more money. We used Airbnb to find a 2-bedroom (plus sofa bed) apartment in the Norborro district, which worked out at £25 per person per night. It was a fairly basic place, but it was comfortable and Jakob our host was welcoming and helpful. What I love about staying in an apartment, as opposed to a hotel is the local knowledge you can get from your host, and Jakob spent a while with us on the first night sharing all his favourite places with us. 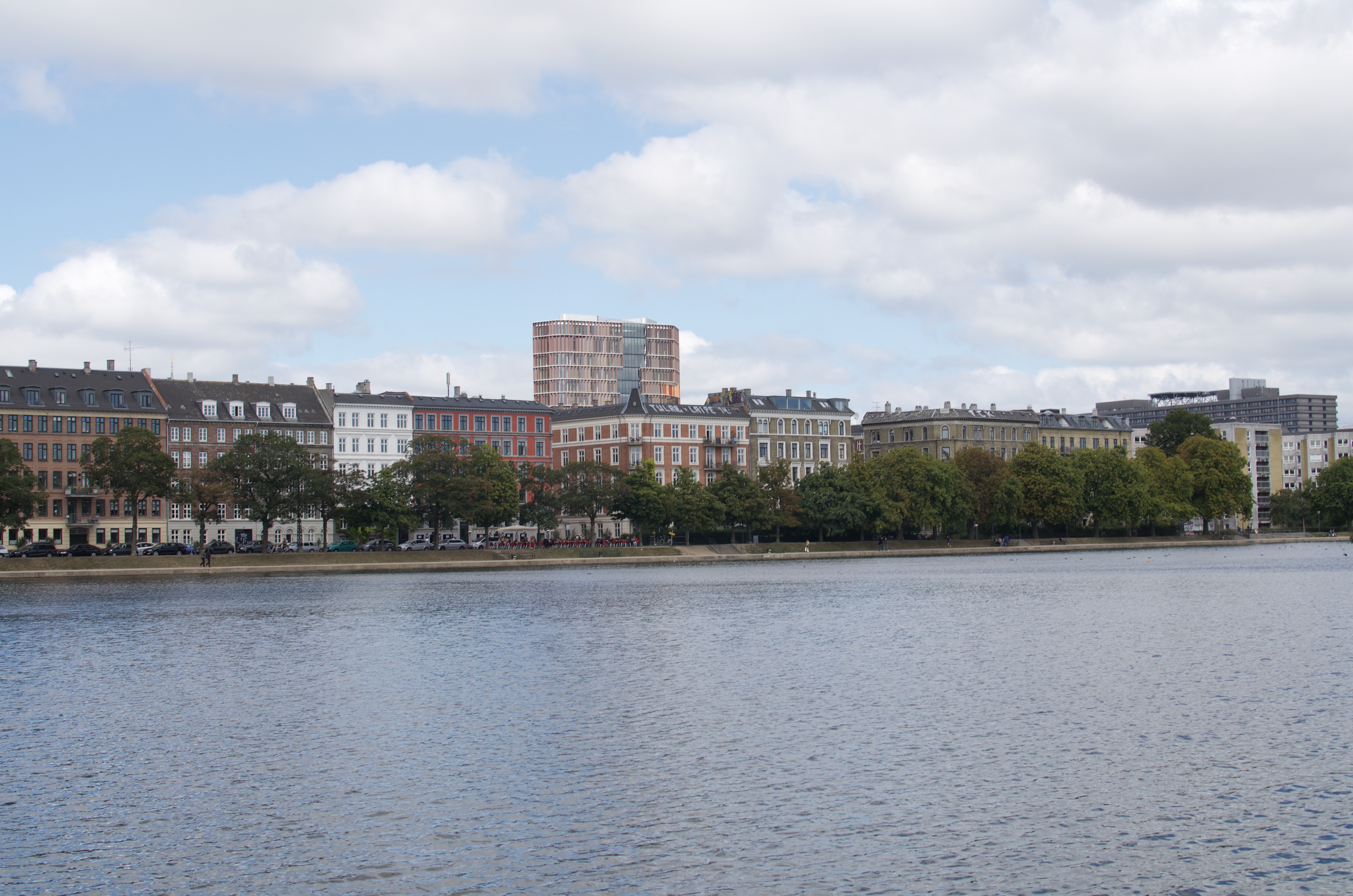 Where we were in Norborro is about a 15-minute walk from the city centre, past loads of cool cafes and shops and the big swimming lakes. It was a bit of a mixed area with some bits super posh and other bits a bit studenty, but all super trendy. The Danes do style and cool very well! There were trams and buses that ran frequently along the main road into the centre, but we preferred to wander along by foot, popping into the shops etc. en route, and of course this way is totally free and the best way to see Copenhagen on a budget!

Walked….A LOT! – We spent a lot of time just wandering around the narrow streets, peering into cute little shops and taking photos of all the amazing buildings. Copenhagen is very pedestrian (and bike) friendly city, so walking around is really pleasant. Obviously this activity is totally free; just remember to wear comfy shoes! If you wanted to hire a bike to get around there are city bikes that are free for the first 30mins and 25 kroner p/h there after. There are automated docking stations all over the city to pick a bike up and lots of protected cycle lanes, it all looked pretty safe and easy, it just wasn’t right for our group this time round.

Visited Nyhavn – Nyhavn is the pretty little harbour that you’ve probably seen loads of times in photos, with its brightly coloured buildings and traditional wooden sailing ships. It’s an area packed with tourists, but well worth a visit, to wander along the cobbled streets and take photos. The harbour is lined with bars, cafes & restaurants but we bothered with none of those. Our Airbnb host Jakob had warned us they were all tourist traps, (low quality & very high price) So instead we bought drinks from the near by 7-11 and sat on the steps listening to a busker, sing jazz tunes in the sun. 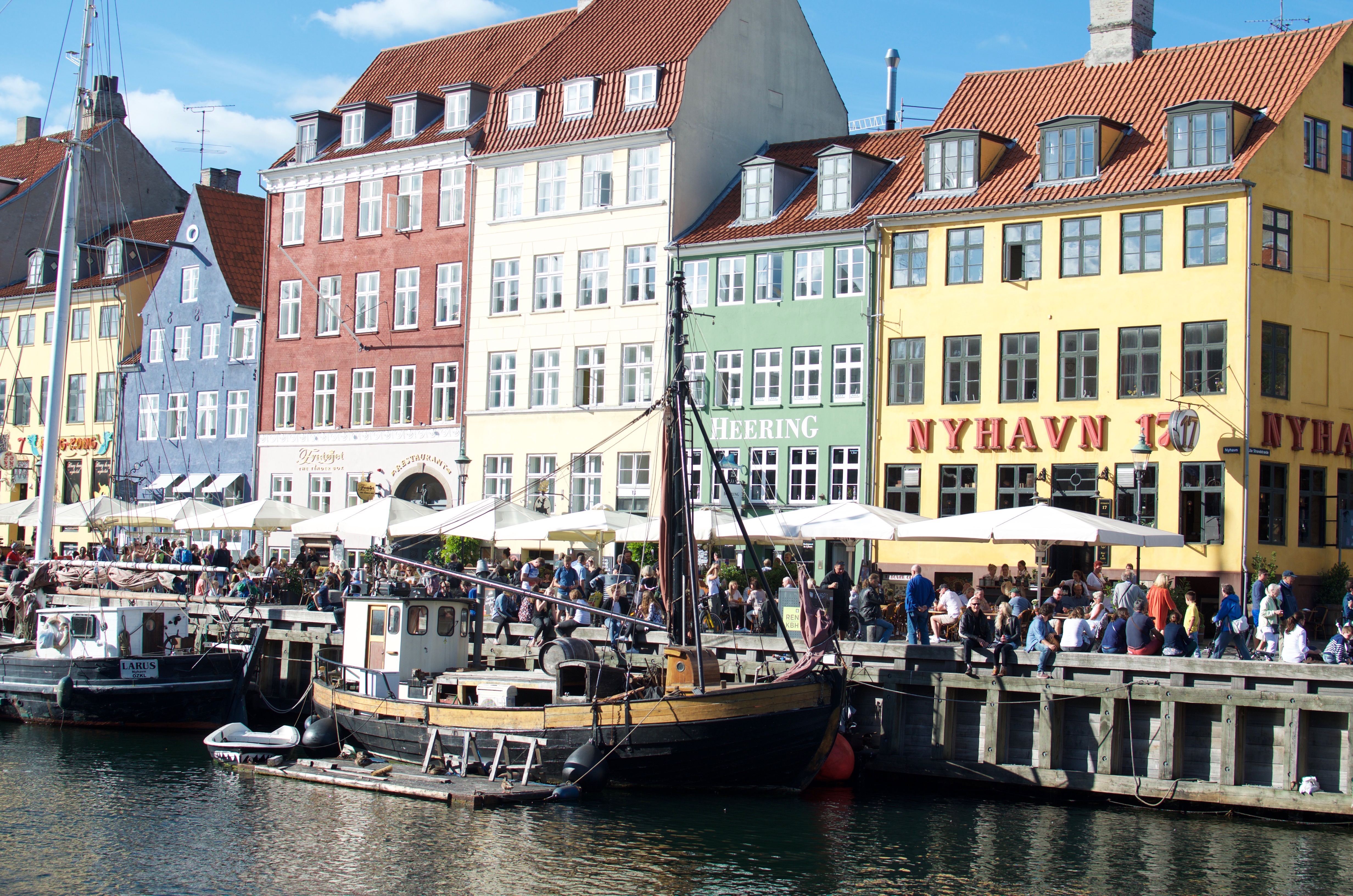 Took a boat trip – Denmark is famed as a sea faring nation, it IS Viking country after all! And Copenhagen is a huge port city so you HAVE to take a boat ride when you’re there. We got on a boat bus from Nyhavn, rather than a tourist boat, which was considerably cheaper and actually included in the 24hr City pass that we bought. The City Pass includes train travel from the airport to the city, plus unlimited public transport in zones 1-4. We probably didn’t get the most value out of the pass as we walked so much, but we definitely saved money on those two trips. This boat stops at Nyhavn, Christianhavn, Royal Opera House and the Little Mermaid. The boat was a great way to sea the city from another perspective, but I can’t say the famed Little Mermaid statue was really all that exciting, bit of a “tick box” thing though. 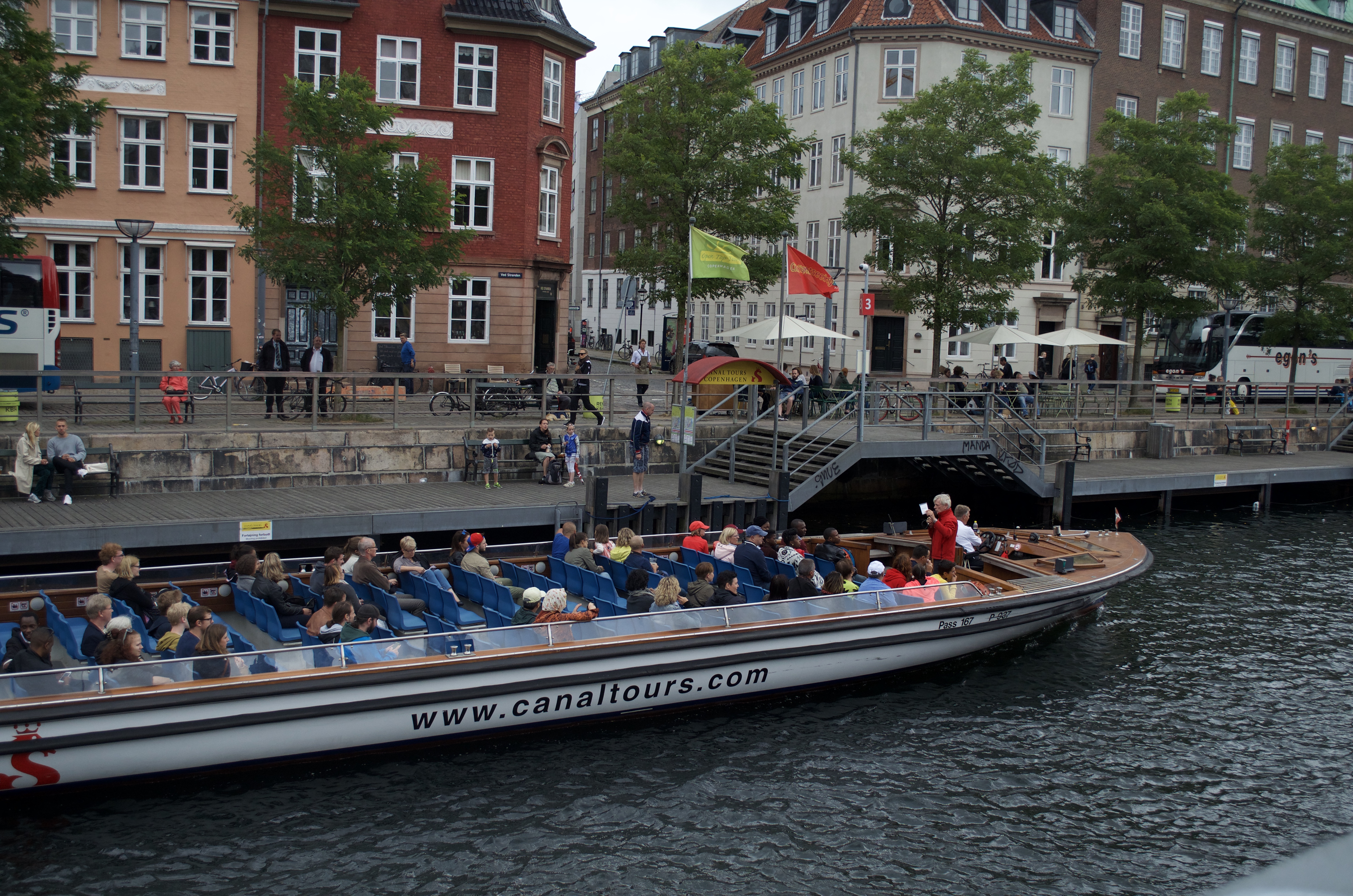 Botanical Gardens – A short walk from Norborro station is the beautiful Botanical Gardens. They’re free to enter and so peaceful you could easily forget you were in the middle of a city. We visited the palm house, which was humid as hell! Full of huge trees, tropical plants and giant spiders (eek!) I felt like a jungle explorer. You can climb the spiral staircase to the top of the glasshouse and walk around the top of the tree canopy, which I did, reluctantly (rubbish with heights) but really enjoyed, even if my camera fogged up and I turned into a sweaty mess. Afterwards, we had a picnic by the lake and took photos of the wildlife (Herons, turtles & swans) 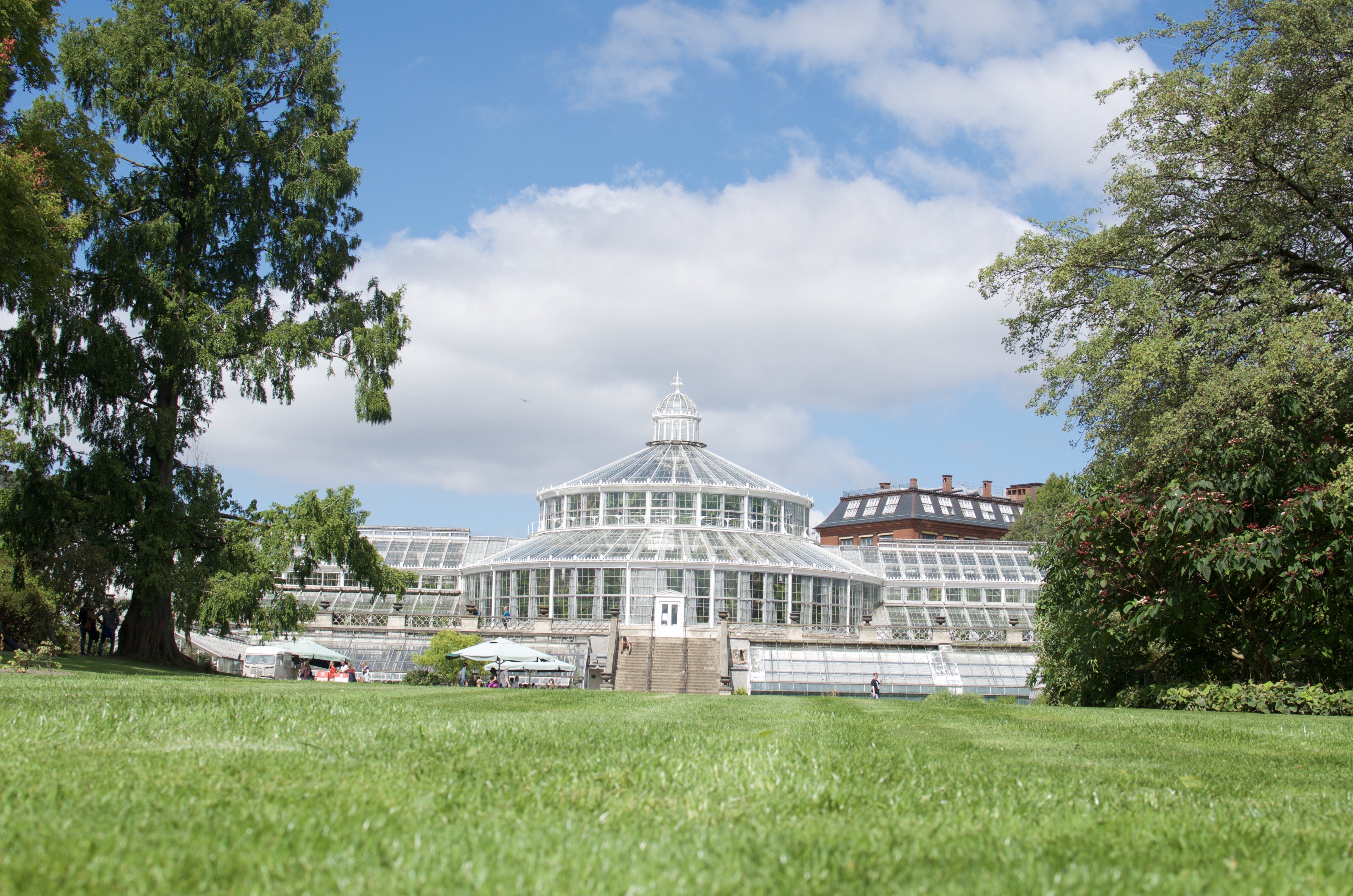 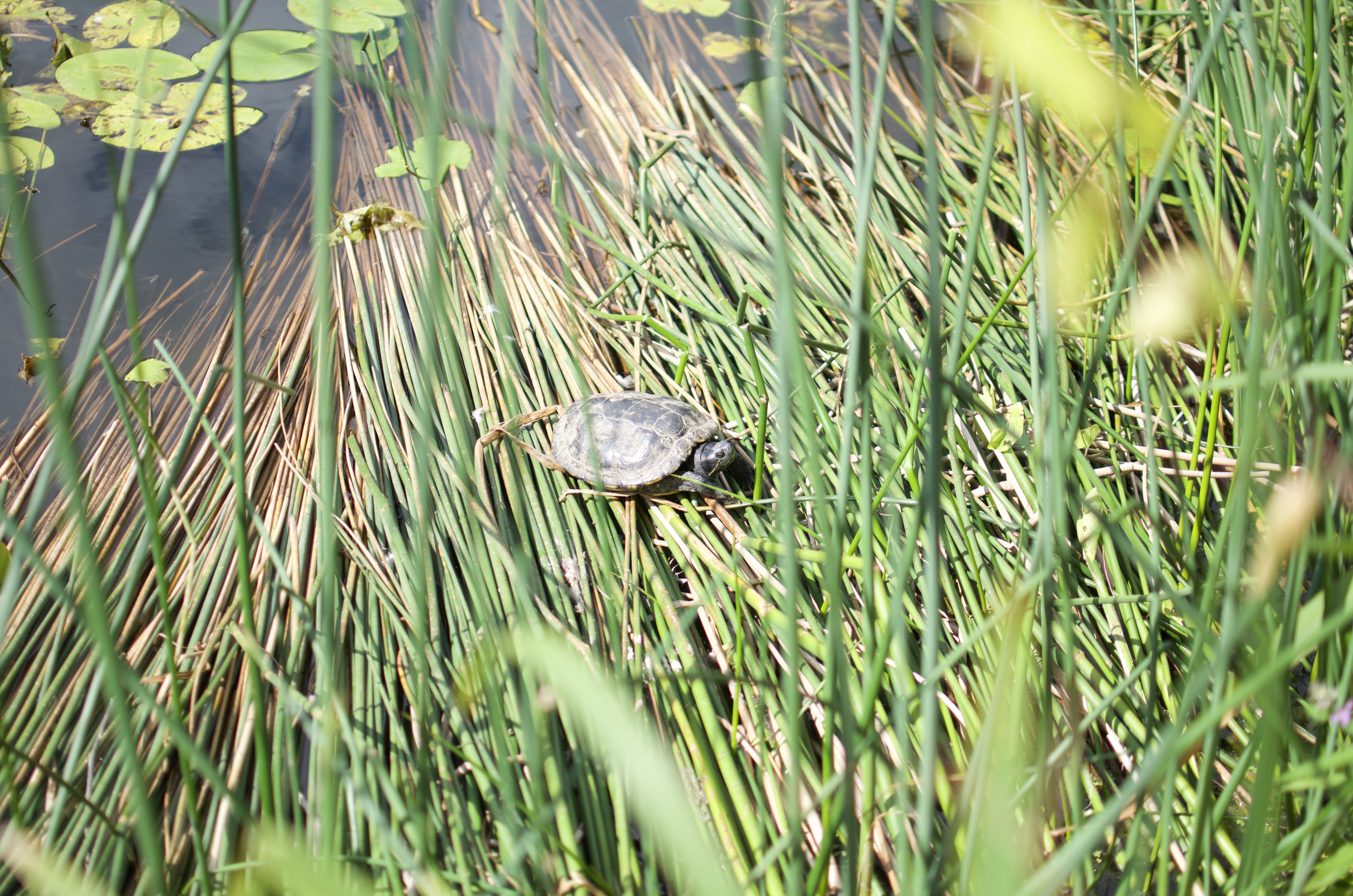 Christiansborg Castle – Denmark still has a monarchy and they are proud of their royal family. Copenhagen and surrounding area actually has quite a few royal buildings. We opted for Christiansborg, which also acts as the parliament building. The castle is HUGE and we could have spent an entire day in there, so we opted just to see the state rooms (it was more expensive to see the whole castle), which were pretty, but nothing I haven’t really seen before. Maybe I’m a little jaded because I’ve been to a lot of castles. What WAS really interesting was the tapestries that hung in the great hall, depicting the history of Denmark from Viking era through to the modern day. We down loaded a commentary app onto my iPhone and listened along. 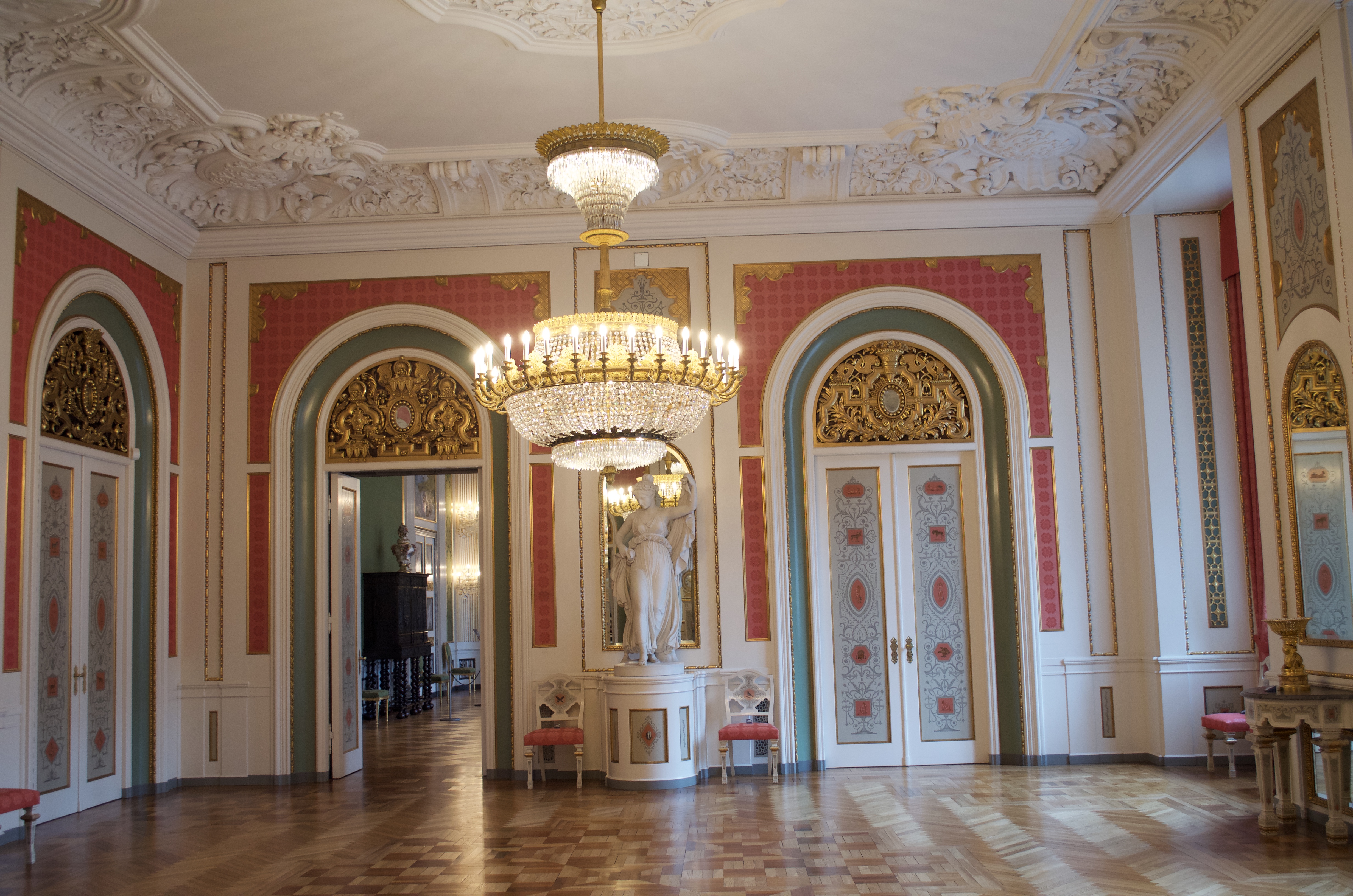 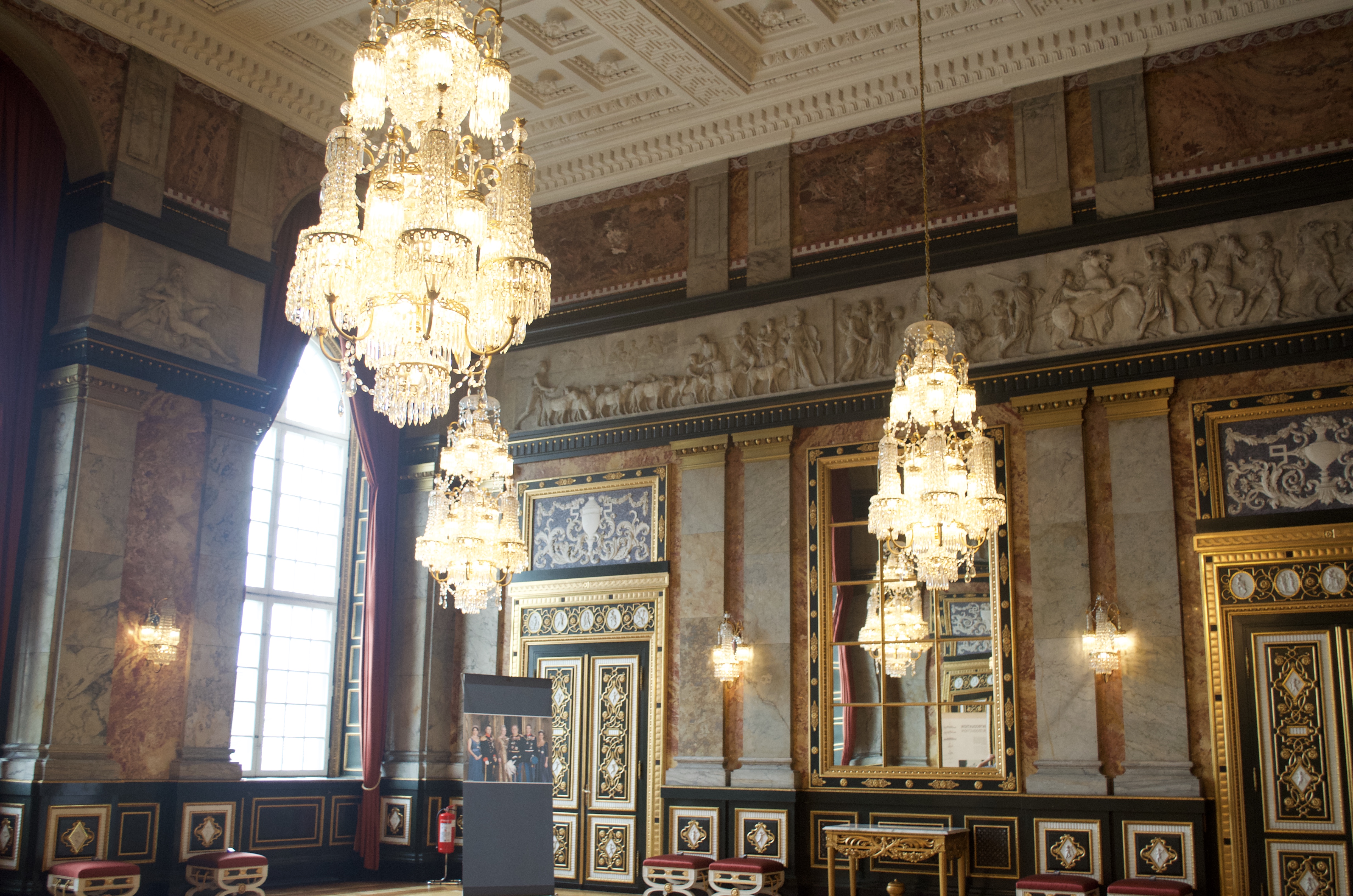 Tivoli Gardens – Tivoli Gardens is a theme park in the centre of Copenhagen and is the second oldest theme park in the world, the OLDEST theme park in the world is also in Denmark. Man those Danes must really like roller coasters! It’s an incredibly popular tourist destination, which also comes with a hefty price. BUT there are ways of cutting the cost. The one we opted for was the park entry with no rides pass. Most of the rides were old wooden roller coasters and tea cup rides which were very pretty to look at, but didn’t really seem all that thrilling. Plus, the grounds of Tivoli gardens are absolutely stunning, there are free shows on the outdoor stages and there is a cool little aquarium to keep you entertained. It’s also full of really good restaurants and cafes. You can buy the usual hotdogs and candy floss, but we opted for proper Italian style pizza. We could’ve had a picnic in the gardens to cut costs, but man those pizzas were good!

Tip: you can PAYG on all the rides, but it’s better value for money to buy the unlimited ride pass for 220 Krone if you go on more than one ride. There are also group discounts have a look HERE for all the pass prices. 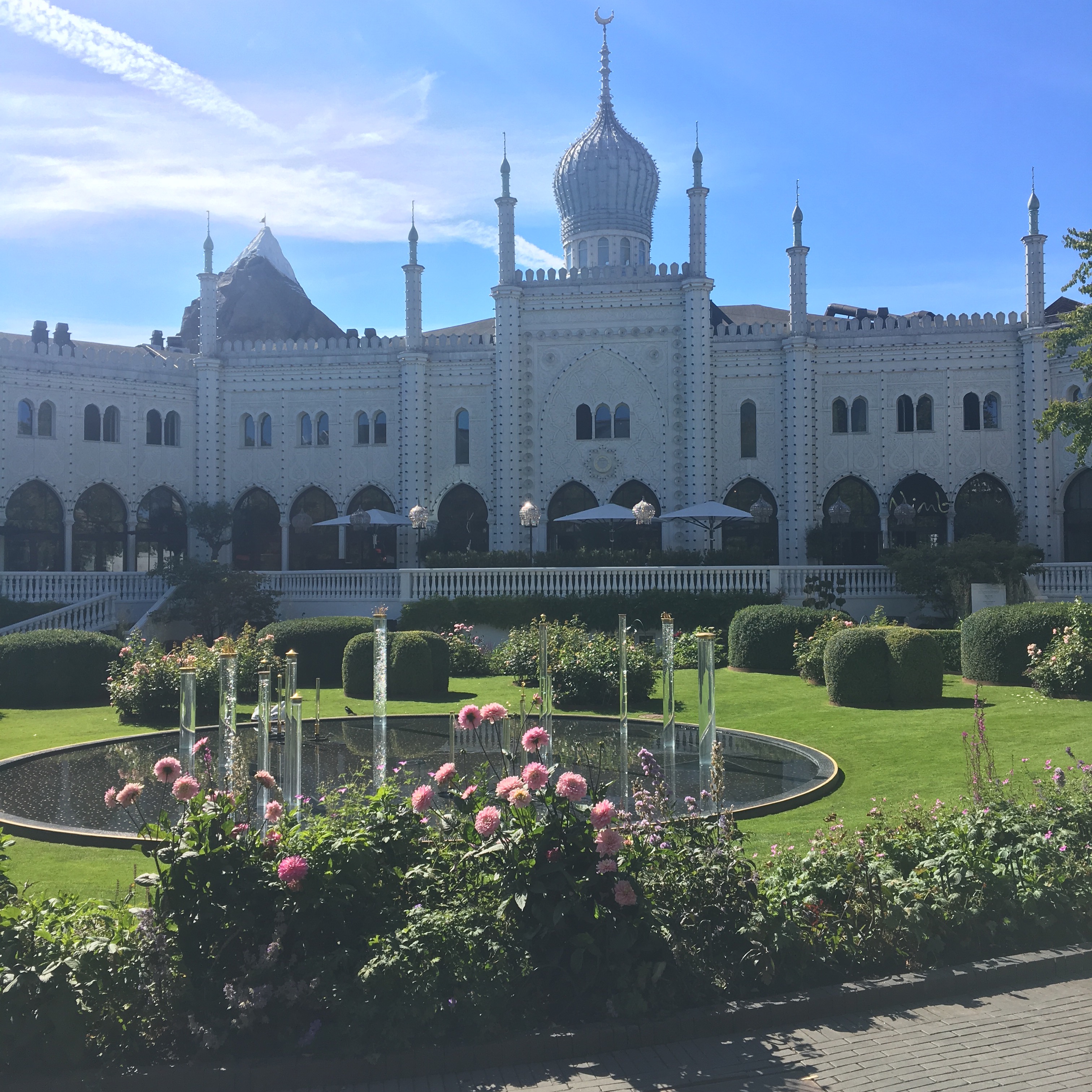 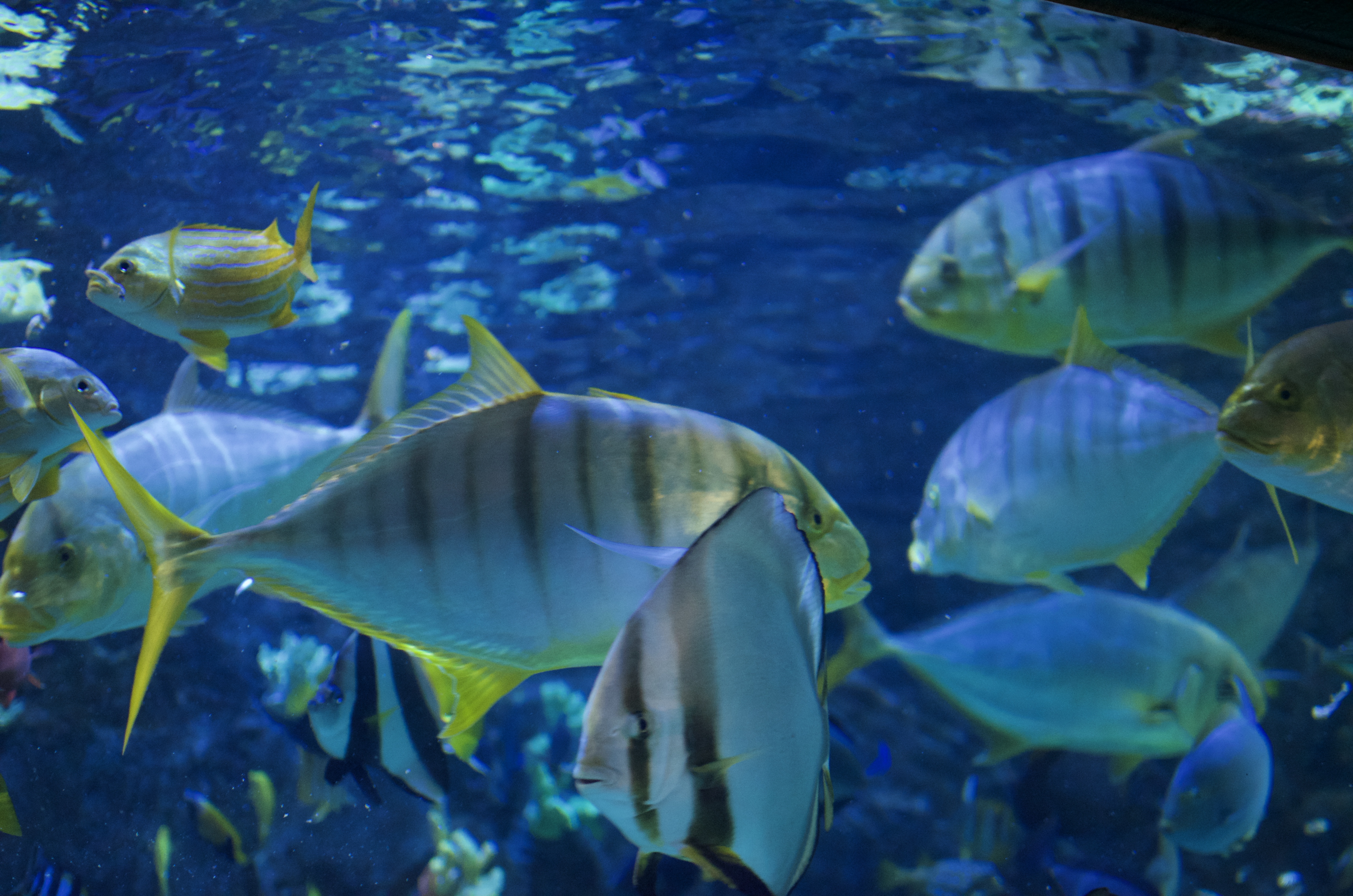 Christiania/Free Town (Pusher Street) – Christiania is a little island within Copenhagen that used to be a military base, until the military moved out and the squatters moved in. It’s classed as a free state and not technically under the jurisdiction of the Danish government, therefore the 800 or so residence there make up their own laws, which most famously involve selling drugs (marijuana) openly. I guess it’s a bit like the red light district in Amsterdam, but with no girls in windows. We walked there from Nyhavn, which took around 15 minutes, over a couple of bridges; it’s an easy and pleasant walk.

The main drag on Christiania is called “Pusher Street” for obvious reasons! The street is lined with market stalls full of drugs and paraphernalia, and the “market stall holders” wearing ski masks. I’m not gonna lie, it felt sketchy AS, but I was massively intrigued and It’s not really something you see every day. There are only two rules on Pusher Street: 1. No photography & 2. No running! I saw people being shouted at by big angry men with dogs doing both of these and trust me, you don’t want to ignore them! There are some bars and cafes set up in this area, mainly in old sheds and barns, but there are also lots of picnic tables scattered around to sit and chill. I don’t smoke weed so I’ve no idea how much the stuff on offer cost, but we did bring our own beers from the supermarket and sat people watching for a while. I’d say it’s definitely worth a visit, just be aware of the rules!

Flights = 0 (I used points) however Ryanair were offering flights from London for £45rtn over the summer and much, much cheaper in the low season.

I haven’t included the cost of food and drink as I’m going to write a separate post on the foodie scene in Copenhagen. However, we saved a lot of money by eating picnics in the beautiful parks around the city, and having a beer or two outside. Denmark has no rules against drinking alcohol in public, so you don’t need to be worried that you’re going to run into trouble. In fact you’ll see lots of people enjoying a drink from a vendor on the street or a few supermarket beers by the river. They have a very relaxed attitude to alcohol in general. 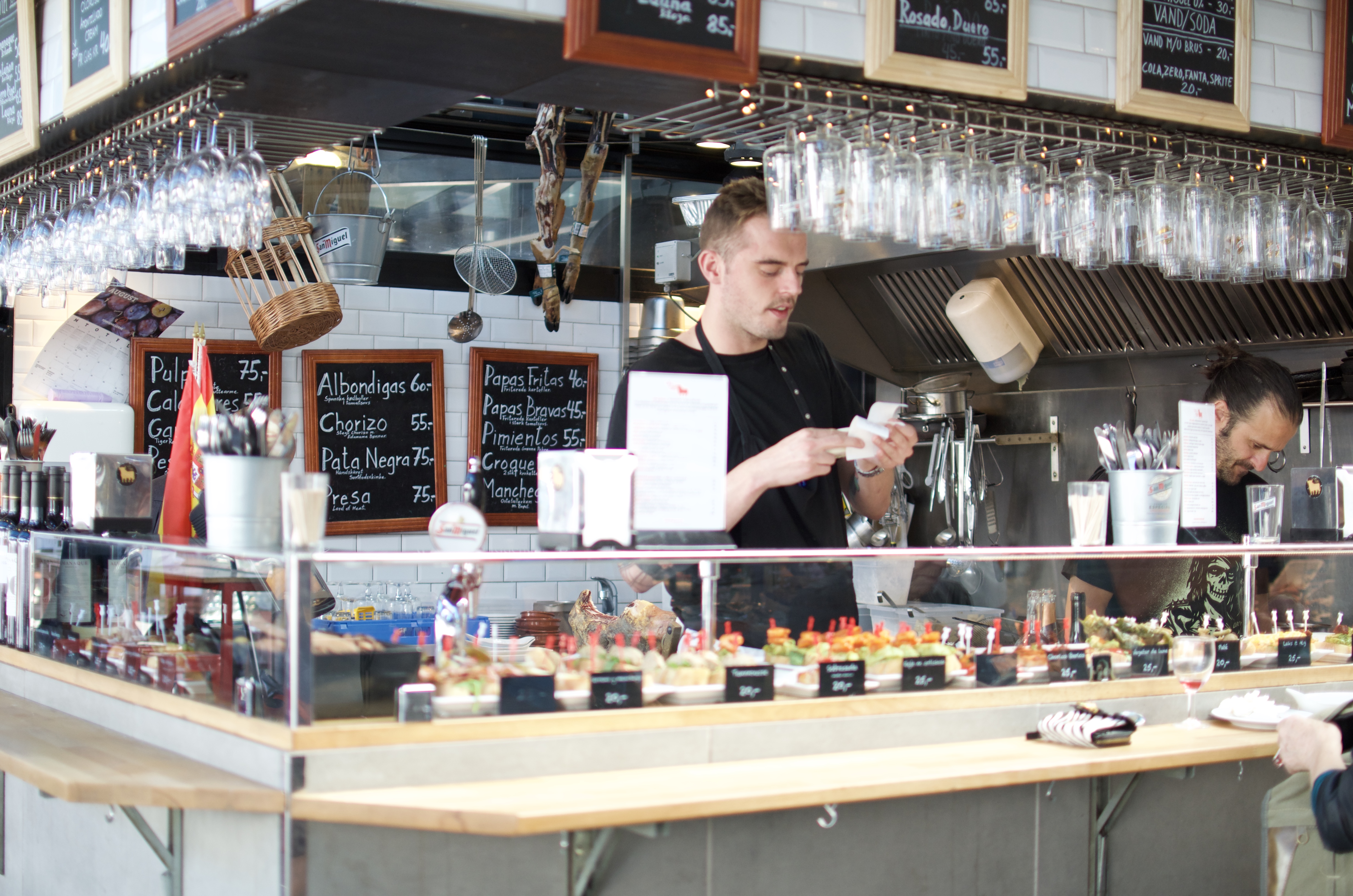 So you see it IS possible to see Copenhagen on a budget, and I would really encourage anyone to go there. It was one of those cities where I could totally imagine myself living: really chilled, clean, interesting and easy place to hang out.

Have you been to Copenhagen? What are your money saving tips for seeing Copenhagen on a budget?

Look out for my foodie guide to Copenhagen, with budget and splurge options included.