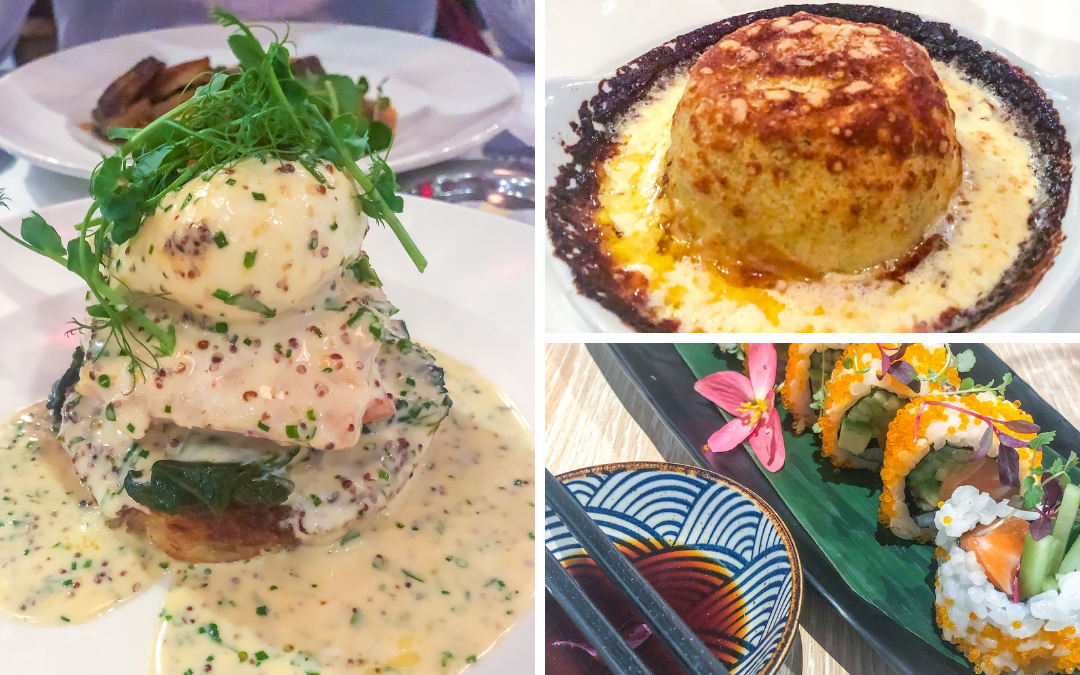 Christmas is a distant memory, we’ve all spent the last few weeks punishing ourselves for our festive excesses with restrictive diets and crazy exercise regimes (haven’t we? haven’t we?!) and then comes along Newcastle Restaurant Week with all its naughty temptation and blows it all out of the water. Well not quite, but it’s hard to resist all of the best restaurants in Newcastle putting together special Restaurant week set menus at bargain prices. It was also the perfect excuse, to try a couple of new (ish) to the local food scene that I’ve been meaning to try out. I visited 4 restaurants over the week, 3 dinners and one lunch, which I felt was just the right amount to get involved but not be too overwhelmed, even though I had serious FOMO scrolling through #NE1restaurantweek on Instagram. Green eyed monster aside, I was very happy with my choices. So, if you’re looking for a little inspiration for Valentine’s day next week or even somewhere to just treat yo self, take a look at my review of 4 of the top-rated restaurants in town.

First up, was a stalwart of the Newcastle restaurant scene…

The Quayside in Newcastle has become a bit of a foodie Mecca over the last few years, especially since Kenny Atkinson opened his Michelin Star restaurant House of Tides. However, the OG of fine dining in Newcastle is Terry Laybourne, so of we had to eat at his flagship restaurant 21! When we arrived at mid-week the restaurant was already bustling, it’s definitely a popular place all year round but especially in Restaurant Week. As soon as we sat down we were given a basket of delicious fresh baked bread and butter, which is my absolute weakness. You know you’re in for a treat when even the bread and butter is amazing. I opted for the legendary cheese soufflé to start and the other half plumped for the game terrine. my dear the soufflé was the thing dreams are made of. Twice baked and sitting in a puddle of rich cheese sauce, it was the dish you’d go back for again and again. The terrine was also excellent, with lots of , but as I was sat there making noises with every bite of soufflé my boyfriend sat looking at me with sad eyes and proper food envy.

For I chose the haddock with bubble and squeak, poached egg and mustard cream sauce. I was a bit sad that when I stuck my knife into the egg it didn’t ooze with yolky goodness, I was after that #eggporn shot really ha, but the dish was delicious. I loved the hint of vinegar in the bubble and squeak cake which cut through the richness of the cream. The boyf opted for steak with peppercorn sauce and duck fat potatoes which was perfectly pink and juicy, everything you want in a steak dish. And finally, on to dessert, well cheese, in my boyfriend’s case. Which wasn’t on the restaurant week menu but the cheese cart was apparently staring at him and he couldn’t resist. I, on the other hand, was well up for a sweet treat, and I’m not ashamed to say I had to look up a couple of items on the dessert menu. anyone? Well, it’s a sort of firm crème /crème brûleé hybrid, which was flavoured with white chocolate and served with poached rhubarb, .

The Restaurant Week deal was 2 courses £15, 3 courses £20 from the set menu, which we thought was an absolute steal given the quality and portion size, especially as the incredible cheese soufflé is £10.20 on the à la Carte menu.

21 is a restaurant you take someone you want to impress, perfect place to take your date and if your date hates this place, ditch them. You just don’t need that kind of negativity in your life…you can thank me later.

Route’s sister restaurant The Staith House on North Shields Fish Quay has been a firm favorite for a few years now, so I was keen to try out this little bistro on Newcastle Quayside. Their concept is small sharing plates a bit like tapas, although they vary in size from little snacks like the pig’s head croquettes with aioli, up to what you would probably consider main course size plates. The Restaurant week menu is a bit of a departure from their usual style, with the 2/3 course thing and it did mean that the portion sizes were pretty small. So, we decided to supplement with a few bits of the main menu too, 3 natural oysters with sherry vinegar, pigs head croquettes and ox tongue with beetroot and yoghurt. To accompany the game terrine, snapper in bisque, and pork belly. You’re probably thinking eurgh tongue? Head?? Well don’t knock it till you’ve tried it! Everything that came out of the kitchen was incredible! Flavour combinations that sounded a bit odd just worked so amazingly together, I can see why Route were awarded the Michelin Bib Gourmand because every dish is created with the same quality and attention to detail as any Michelin star restaurant I’ve been to, but with chilled laid-back surroundings. The style is very hipster, bare copper pipes and brick walls with wooden tables and exposed light bulbs dangling from the ceiling. This is a cozy, modern little bistro with impeccable food.

I’ve since been back to Route for their Sunday lunch and it was also mind blowingly good. Book now, this place is super popular!

Technically part of NE2/Jesmond restaurant week, but let’s not split hairs eh? Jesmond, just outside of the city centre also has an abundance of amazing eateries who wanted to get in on the restaurant week hype, and who can blame them?! I’d been eat at The Patricia for a while, I’d heard amazing things about them from fanatical foodies I know and knew that the head chef and owner, Nick Grieves, had previously worked in famous Michelin starred restaurant The River Café in London which definitely piqued my interest. The only table we could get for Friday dinner during restaurant week was 5.15! It’s quite a small place and obviously has an amazing reputation already so I could see why. The food offering at The Patricia is modern European in style using only the best seasonal ingredients, which means that dishes come and go from the menu frequently.

The restaurant week menu offered 4 starters, 4 mains and 4 desserts simple! To start we had the chicken liver Pâté with jelly and toasted brioche. The pâté was so light and creamy it went perfectly with the sweetness of the brioche and jelly, heavenly! We also had the salted cod with egg and da Música (a type of ). Which to be perfectly honest was a bit of a disappointment. The salt cod was perfectly nice, like a kind of fish pate, but the da Música was like a stale tortilla wrap and a bit ….meh. Never mind, the main courses were good heart-warming winter dishes of confit duck leg with lentils and aioli and Gnocchi Parisienne with shiitake mushrooms and butter sauce. Both were incredibly delicious, but I did have a pang of sadness when I looked at the regular menu and saw that the Gnocchi is usually served with shavings of fresh winter black truffle!!! my days I truffle. But I wanted to stick to the Restaurant Week menu this time at least, I’ll just have to go back and pray that it’s still on the menu.

We finished off the meal with a classic, a very rich dark chocolate mousse with salted caramel and hazelnuts which was to die for and an Affogato; beautiful bitter espresso and a generous helping of ice cream. Over all, I loved my experience at The Patricia, it’s absolutely one for committed foodies, they were awarded a Michelin Bib Gourmand recently and their reputation is growing both locally and nationally.

Opened just before Christmas, this pan Asian place in Eldon Square is the sister restaurant of Nudo in China town which I’ve been going to for 10 years or more, so I was intrigued to find out what their new concept restaurant was like. I’ve got to be honest and say I’m never usually all that excited about restaurants in shopping malls, I have visions of Maccas or Pizza Hut. Not that there’s anything wrong with those kinds of places, they all serve their purpose, right? But shopping centre food just doesn’t get me going. HOWEVER, I was pleasantly surprised by Uma mi. Being Pan Asian, they don’t offer starter and main course, rather a small dish and bigger dish and everything comes when it’s ready. So, between two of us we ordered nigiri sushi (small), Dragon sushi roll (large), chicken thigh yakitori (small) and chicken teriyaki donburi (large). And because we’re gannets and can’t say no to Korean chicken we ordered a portion of that as well, as an extra. It all arrived very quickly, which for a work day lunch or a bit of hard-core shopping sustenance is exactly what you want. We really enjoyed all of the sweet, sticky glazed, tender chicken and fresh, clean sushi as a good balance. I know purists would say sushi first then you eat hot dishes, but we both enjoyed plunging our chopsticks into the different dishes, back and forth. I would absolutely recommend Uma Mi for a quick lunch (we were in and out in 40 mins), an after-work cocktail and nibbles, or a pre-theatre early bird tea. It’s probably a little too casual for dinner, but that’s just my personal preference.

All in all, Newcastle Restaurant week was fantastic. We had a good mix of formal and informal, British, French, Mediterranean and pan Asian and it was the perfect opportunity to sample new restaurants. It’s great to see so many new places opening in the toon to challenge the old guard. Plus, I’ve already been back to Route and I’m still dreaming about that cheese soufflé at 21.

Newcastle Restaurant week is twice a year in January and August, but you don’t need to wait till the summer to try them out, Valentine’s day and Mothering Sunday aren’t too far away (wink, wink!) Many of these restaurants also offer early bird set menus along-side their a la carte menus so you can get out and try loads of them without breaking the bank.